I Thought YOU Had The Worms

Today is my dad’s birthday.

He’s the first man I ever loved, and he’s a tough act to follow.

He’s set an example of hard work, giving back, and kindness that is an inspiration to everyone who knows him. And, to keep us from being intimidated, he consistently forgets to bring the bait when we go fishing, and joins in when we laugh about it.

In honor of him and his birthday, here’s one of my favorite posts inspired by my dad. 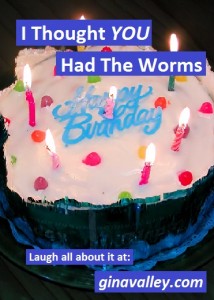 I try to take my kids the 1300-ish miles to visit my parents a couple times a year.

We can go to their house. We can visit the people who live there and look just like my parents. But they are not my parents.

I don’t know who these people are, but they are definitely not my parents.

My mom never baked a “Cake of the Day,” or, right before bedtime, or anytime for that matter, never encouraged us to “Have another big piece of cake or two to finish it up” because there’ll be a new cake baked in the morning.

Today’s Cake of The Day was chocolate, by the way.

My parents never let the dog sleep in our rooms, much less our beds. Heck, our dogs were rarely allowed to hang out indoors at all. I know my parents would never let their giant golden retriever beg for and receive food from the dinner table. And breakfast table. And lunch table. And snack table.

My parents never said that we could “watch whatever you like” on TV, or “Let’s watch another movie. You can sleep in if you’re too tired in the morning.” I grew up under the impression that staying up late and sleeping in was a character flaw. These people encourage everyone in the house to do it, and occasionally join in themselves.  Who are they?

My parents never loaded us into the car for a trip, be it to Grandma’s house, Disneyland, or the mall, after 5:00AM. Usually, 4:00AM was the goal. We were told we “have to get an early start” so often that I thought it was a federal law. These people scoffed at the idea of waking my kids before 8:00AM to start packing up our van for our trip. “Let them sleep,” they said. “They’re young.  They need to sleep.” What? 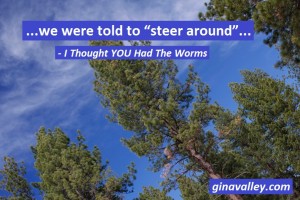 My parents would never hire someone to bring in a crane to remove a couple of the 150 foot tall pine trees in the forest in their “backyard” to make a better sledding run. I believe we were told to “steer around” any obstacles in our path while sledding. Steer around? How do you steer around? Does that mean bounce off? ‘Cause that’s what we did!

My dad would never make a tool for girls who don’t want to touch the fish they just caught, so they could hold up their quarry for a photo without having to touch the slimy, flapping thing. I was told that slime was good for my skin and would keep them soft. As I recall my soft hands stank for a week after each fishing trip.

My parents would never say that children shouldn’t help with chores while they’re visiting their grandparents. I don’t know who these people are who keep singing the “They’re on vacation. They don’t have to help,” refrain every time I tell one of my kids to take out the trash or to clear the table, but I know they aren’t my parents. 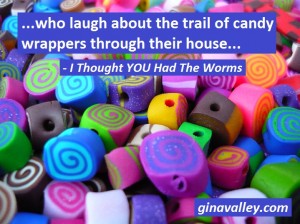 My parents would never have a candy dish they constantly refill throughout the day, so as to ensure children had an unending source of sugar readily available to them. Who are these people who laugh about the trail of candy wrappers through their house, and say, “Isn’t that sweet?”?  Isn’t that sweet? I don’t know. I’m too confused to think.

They don’t mind feet on the couch or toys everywhere, and they just said, “We can vacuum tomorrow!”

Who are these people?

And, can I get that chocolate cake recipe?

Did your parents disappear, too, when they became grandparents?  Were they replaced by look-alikes who have a totally different attitude? Shoot me a comment.  I’d love to hear all about it!

Top 10 Ways to Be A REAL Dad...Gina's Favorites