How To Make Ice Cubes – An Old Family Recipe

I decided I better write down the recipe for this old family favorite after my husband, The Professor, explained to me that the football team of the cross town rival of his university no longer had ice in their Gatorade because the guy who knew the recipe had graduated.  I’d hate to think of such a tragedy visiting our family, as I am, judging by the perpetually empty trays, currently the only pack member who knows this secret recipe. 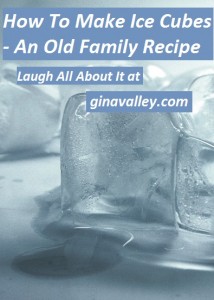 So, here is the recipe, along with tips and techniques from my personal, real-life ice cube making experience.

As you plop down on the sofa next to your two year old and sip your wine, you will remind yourself that wine really is essential to all good family recipes.  And, you’ll make a mental note to start with the last step of this recipe first next time.

What are your favorite family recipes?  I’d love to hear about them!  Shoot me a comment before it’s time to mop something up again.

It's Different When Mom Gets Sick