gina valley
Sign up with your email address to be the first to know about new products, VIP offers, blog features & more.
As I’m spending extra time celebrating with my family, today’s post is one of my favorites from the past. – gina 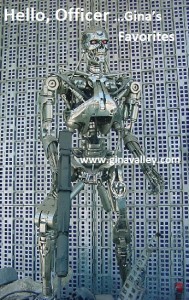 He’s hysterical, but that was totally his fault.  I know I was only thinking about that song because of his Road Trip story, and his playing the COPS theme in it.  If he’d been sitting next to me, he would have been laughing. 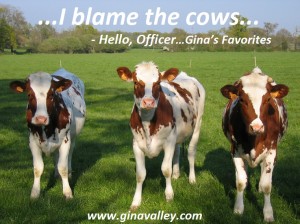 I blame the speedometer.  When I noticed that officer Schwartze-cop had taken a notice of me, I did what any generally law-abiding citizen would do.  I assumed I was doing something wrong, and checked the speedometer to see exactly how wrong I was.  Well, our speedometer has something of a defect, so I was unable to determine exactly how fast I was going.

I had no idea how fast I was going, and I knew he was going to ask me if I knew.  Should I have told him that I didn’t know because my speedometer is only labeled up to 99MPH and the pointy thing was way past that?   Maybe I should have kept that to myself. 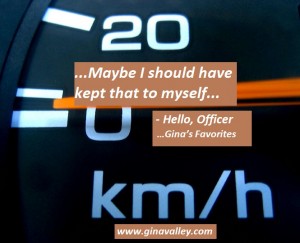 I was a bit nervous, because I wasn’t sure how it was going to go with this officer.  I just knew that I had to get the COPS theme song out of my head or I was going to bust out laughing when he got to my window, and I would end up standing on the side of the road trying to walk a straight line while my whole pack and The Professor sleep through the entire thing.