We had a dog named Douglas. We loved him all very much.

But, and I mean that in the nicest possible way, Douglas was an idiot.

Often when I’d look at Douglas I’d say to him, “It’s a good thing you’re pretty.”

He was pretty. He was a lab and saluki mix, with shiny black fur that was soft like a rabbit’s. His mouth was always smiling. He had a long tail with a dangling, silky fringe that that never got tangled. He was lean, and looked like he could run down a cheetah. He really was a pretty dog.

He was also pretty dumb. 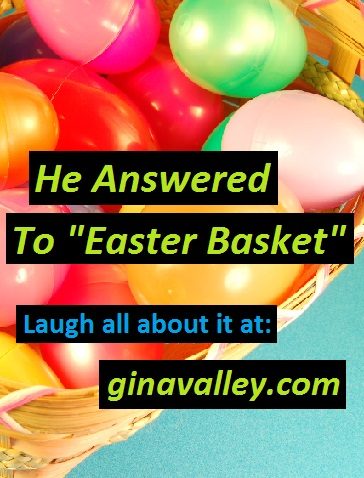 Douglas joined our family when he was 9 months old. His first family had named him “Douglas,” after the black train on the Thomas the Train TV show. We opted not to change his name because we didn’t want to confuse him. If we knew then what we know now, we would have just laughed and laughed and laughed at the idea of not confusing him.

Douglas, who was sweet and wonderful with children, despite his enormous size, lived in a constant state of confusion. I swear sometimes the other dogs were laughing at him. I sometimes scolded them for that. Apparently, he wasn’t the only confused member of our family.

It took nearly 2 years to teach Douglas to “sit” on command. It took nearly 4 years to get any kind of acknowledgment from him that when we hollered “No!” we are not happy with what he is doing, and he should stop. Even then, sometimes all he did was pause.

He didn’t wag his tail like normal dogs. He had an asymmetrical pattern when he put his tail into motion. When he was especially excited about something he’d do what we call “helicoptering,” which was when his tail just made continuous, enormous circles.

But, it was his seeming inability to understand what his name was that was the source of most of our head shaking and giggles.

For the first two years after he joined our family, we would call out, “Douglas!” to get his attention, and then, having received no acknowledgement whatsoever again, we would call out, “Trixie!” to get Douglas to come to us (you might remember Trixie was one of our other dogs who, sadly, passed away a couple years before Douglas did). Douglas would see Trixie run up to us, and he would follow her. The funny thing was he would run up to us if we called out, “Trixie!” even when Trixie wasn’t home. 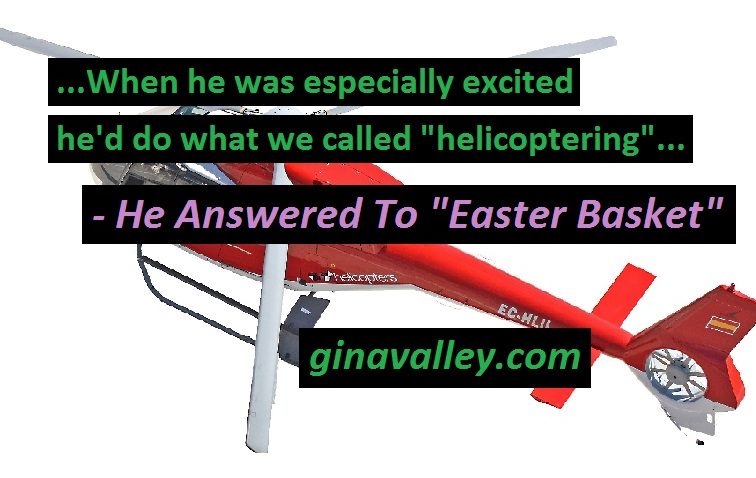 But, that was OK. At least we knew how to get his attention.

And, he was very pretty.

Even though it usually received no acknowledgement from him, we consistently call Douglas “Douglas.” We were ever hopeful that he’d catch on to his name. But, at 13 years old he still hadn’t.

For almost 6 weeks one spring he answered solely to the name “Easter Basket.” Daughter#1 was in a conversation, and when she said, “Easter basket,” Douglas charged across the house, giant paws slipping and sliding, long legs flailing, right up to her. We thought it was a coincidence.

It was not unusual for Douglas to make a sudden mad dash through the house for no apparent reason. We didn’t even answer the door if he ran up and barked at it unless the other dogs did, too. He had excellent hearing. He even heard, and I think saw, invisible people. 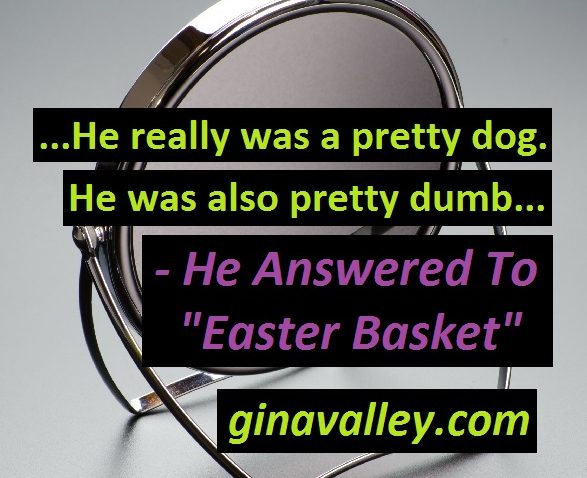 So, scientifically minded family that we are, we tested “The Easter Basket Moniker” Theory later that day. We had Son#3 sit on the sofa in the family room with no food nearby, as we wondered if Daughter#1 being in the food-centric dining room earlier had been the reason he had made his mad, well-timed dash. Son#3 called out, “Easter Basket!” Douglas came running.

I’m not sure if Douglas thought “Easter  Basket” was his name, or if he had associated “Easter Basket” with candy, and was hoping to get some (my dad also came running at the phrase “Easter Basket.” He loved him some candy!), but for whatever reason, for the first time in his near decade as a part of our family, we had a reliable way to call that dog to us. Gotta admit it felt a little weird hollering it out at the dog park, though.

After the end of his “Easter Basket” phase, we went been back to calling him “Douglas,” while he went back to having no idea that we are talking to him.

Until one fall day.

I called out, “Douglas!” and he tore through the house and ran right up next to me, looking at me expectantly. I was so shocked that it took me a minute to remember I was calling him to see if he needed to go outside. He went out. 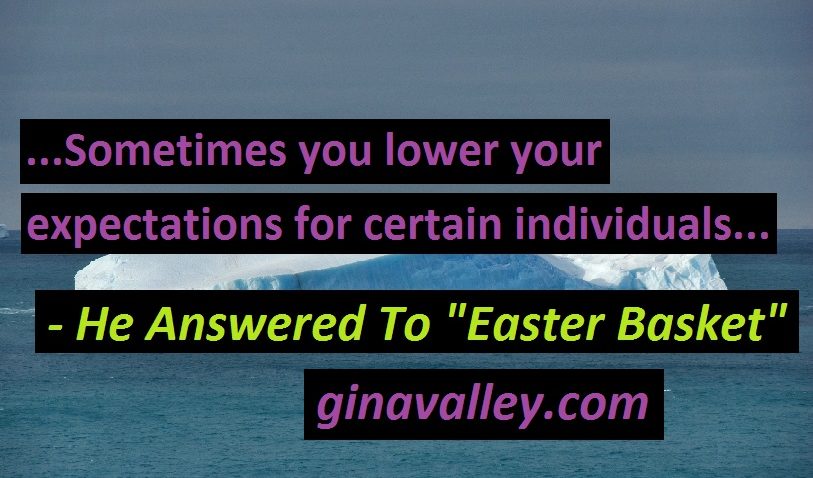 Twice more over the next couple hours I called out “Douglas!” and he ran right up to me. I was so excited that at nearly 10 years old he had finally learned his name. Sometimes you lower your expectations for certain individuals. I could hardly wait to show my kids.

When my pack got home around dinner time, I called out “Douglas!” to give him a chance to show off his new found brilliance. No reaction.  I tried several more times. I even tried with a Scottish accent. No dice. He didn’t even look at me until I walked over to him and petted his head.

Whatever iceberg had popped through the surface of that vast empty ocean that was his brain had sunk back down into the depths.

But, that was OK.

And, luckily, he was very pretty.

Know anyone whose wheel is spinning, but you suspect the hamster fell off long ago? Ever have one of those “what’s my name again?” days?  Shoot me a comment.  I’m looking forward to hearing all about it!

This column first appeared right here on ginavalley.com on as If It Answers to “Easter Basket” It Must Be Our Dog, August 23, 2012.