July 4th is a big day here in the United States.  It’s our birthday!

We love to celebrate, and having something we can all celebrate makes it extra special. 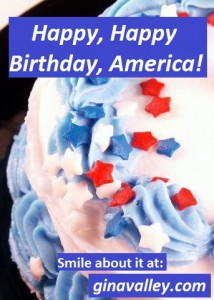 Here’s a few thoughts for your birthday – some serious, some silly:

Freedom is nothing but a chance to be better – Albert Camus

The difference between a duck and George Washington is:  One has a bill on his face; the other has his face on a bill!

Liberty is the breath of life to nations – George Bernard Shaw

We must be free not because we claim freedom, but because we practice it – William Faulkner

The 4th of July is coming up and you know what that means! Time to use Sparklers as wands and shoot spells at people again! And, to write your name in the air! 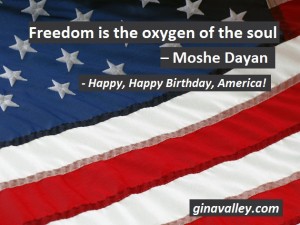 What kind of tea did the American colonists thirst for?  Liberty!

Freedom is the oxygen of the soul – Moshe Dayan

What was the craziest battle of the Revolutionary War?   The Battle of Bonkers Hill.

What did one flag say to the other flag?  Nothing. It just waved!

He that would make his own liberty secure, must guard even his enemy from opposition; for if he violates this duty he establishes a precedent that will reach himself  – Thomas Paine

Food, Family, Fourth of July, and Fireworks. The four best F-words ever! 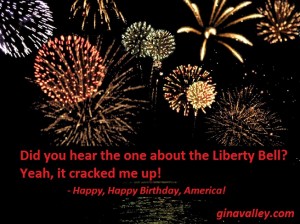 Did you hear the one about the Liberty Bell?   Yeah, it cracked me up!

What happened as a result of the Stamp Act?   The Americans licked the British!

People have forgotten what the 4th of July really is. It’s the day we got the freedom we use every day. It’s not fireworks and parties. That’s just what makes it fun.

Why were the first Pennsylvania settlers like ants?   Because they lived in colonies. 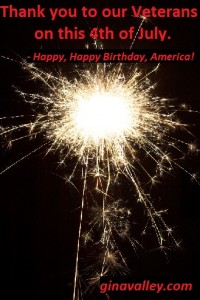 Being an American is awesome. The end.

Why did Paul Revere ride his horse from Boston to Lexington?   Because the horse was too heavy to carry!

Thank you to our Veterans on this 4th of July.

What was General Washington’s favorite tree?   The infantry!

Those who expect to reap the blessings of freedom, must, like men, undergo the fatigue of supporting it – Thomas Paine

Liberty is always dangerous, but it is the safest thing we have – Harry Emerson Fosdick

7,000 people were treated in emergency rooms for injuries sustained from fireworks. Don’t be a statistic.  Let your friend light the fuse!

Be safe, be sane, and have a joyous day!

What do you love about your homeland?  How do you celebrate it?  Shoot me a comment.  I look forward to hearing all about it!

Do These Lights Sound Pretty?...Gina's Favorites