I was subjected to unjustifiable torture this weekend.

My nephew, my older sister’s son (she says that I don’t need to point out she’s older. But, I do need to. Because she’s older. Much, much older. And, she always made me be Ken when we played Barbies when I was little.) (Actually, that might have been my other older sister. Hmmm. Oh well.) graduated with his Bachelor’s Degree. I’m not sure what it was a degree in. But, he is very tall, so it might be in Tallness. 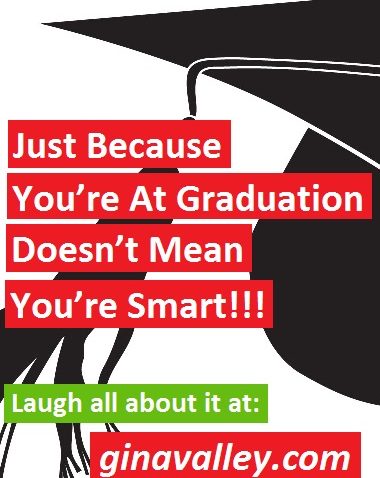 I’ve attended, well really suffered through and barely survived, but who wants to start off all negative, more graduation ceremonies than I can remember, much less count. Of course, that could be because of my Post Graduation Ceremony Stress Disorder (PGCSD).

Let’s start with the people on the stage, or, as I was told they are called by a very official looking guy with a rake at my son’s 6th grade graduation ceremony, “The Platform Party.” They seem to be in charge of all the talking. And there is a lot  of talking!

Since most of you, all of you in fact except the one student up there, are not graduating, why did most of you in The Platform Party wear a robe? Are you being forced to wear that as punishment or a hazing of some type? And, what’s with all the weird hats? Did you think this was Hogwarts?

Those of you in suits looked nice, but did you consider that graduations always take place on the hottest day of the year and that you would appear to be a melted snowman by the end of the ceremony?

The one dude who was up there in holey jeans and a raunchy looking sport jacket – Dude – seriously? Were you just trying to look like a heroin addict? Did you cut those holes in the jeans specifically so we’d know what color your underwear was? (BTW, thanks for wearing some – not everyone attending did!) 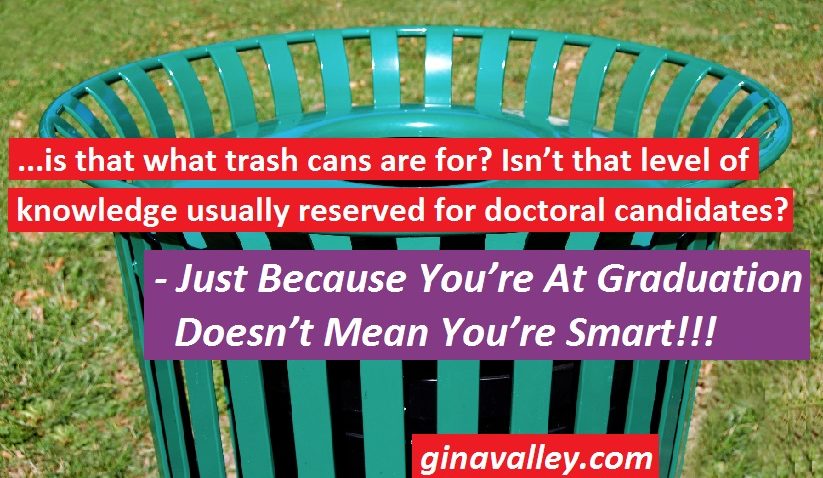 Do we really need an announcement before the ceremony reminding us to put trash into the trash
cans? Really? Gee, is that what trash cans are for? Isn’t that level of knowledge usually reserved for doctoral candidates? Is anyone else as thankful as I am for this helpful reminder?

How about the announcement to stay until the end of the ceremony, rather than just getting up to leave after your family member’s name is read? Is this really a problem? Is anyone that dumb? And, if they are, will this announcement actually have any effect on their behavior?

Is there some sort of epidemic of ceremony jumpers, who leave after the person they are interested in has done their part in ceremonies, sweeping our nation? Are friends of the bride jamming out of churches without waiting to hear from the groom, so they can get a jump on the reception? Are all the art majors’ families seated at the Olive Garden before the psychology kids get to trip over the microphone cords running across the stage? Shouldn’t being stupid and rude make it illegal for you to breed? 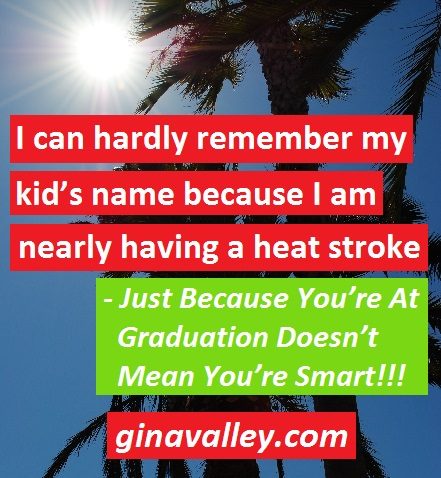 What’s with the token politician in the platform party? Do you realize I’m not going to vote for you because you’re up there? You didn’t happen to pay off our student loans or get us a good parking space, did you? Are you aware I can hardly remember my kid’s name because I am nearly having a heat stroke? Do you really think I’m going to remember you were here?

Do you want the votes of me and every other non-felon member of the audience to be cast in your favor? Then, why don’t you stand up and tell them to quit the yammering and to read off the graduates names so we can all go inside?!?! Do you realize I have a two year old with me and she bites when she’s irritated? Can’t you help me out?

Is there some reason the introduction read about honorary degree recipients has to be twice as long as their acceptance speech? And, what exactly is twice of infinity? Are the recipients of honorary degrees attempting to speak for as much time as it would have taken them to actually earn the degree?

And, what’s the deal with these honorary degrees anyway? Don’t you think giving that to someone during the graduation ceremony is kind of a pie in the face to all the graduates there who actually had to study and attend classes for years to get their degrees, not to mention pay for them?

If you’re going to be speaking in any capacity, anything from introducing someone to giving the long (too long actually) commencement address, don’t you think it might be a good idea if you read and maybe checked the pronunciation of the big words in your part? Aren’t you embarrassed when you have a doctorate in English and you pronounce “entrepreneur” wrong three times in under three minutes? It’s not pronounced like “trompe l’oeil,” you know?

And, if you are standing next to someone who has pronounced “entrepreneur” wrong big time, like unrecognizably wrong, twice already, couldn’t you whisper the correct pronunciation into the poor woman’s ear, so she can regain a teensy shred of dignity or at least get the audience to stop giggling?

Shouldn’t you, as the speaker, also be fairly familiar with and readily able to pronounce common or small words like “aids” or “location” correctly?

If you must name drop every “famous” person you have ever bumped into, couldn’t you just list them off quickly and sit down, rather than peppering a 45 minute diatribe about the unfairness of life (very uplifting, by the way, thank you!) with them? Can’t you, as speaker, remember the most basic rule of speaking at a graduation? (It’s shut up, shut up, shut up, shut up!!!)

I’ll got some questions for The Audience members in my next post.  I’ll hit The Graduates up after that.

I’ll see you there!

What’s your favorite graduation horror, I mean, endearing story? I’m looking forward to hearing all about it, so please drop me a comment! And, thanks for reading!

This column is based on Just ‘Cause You’re At Graduation Doesn’t Mean You’re Smart, which originally appeared here on ginavalley.com May 30, 2012

He Answered To "Easter Basket"