I met my new neurologist yesterday. She was patient and thorough and didn’t make me feel I’ve lost my mind (which it’s her job to check on) (she assured me that my mind is right in my head, and showed me a picture of it in there, too, to prove it). 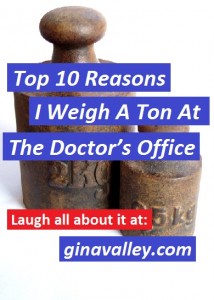 Doctor’s scales are every woman’s arch-nemesis.

Last month, the scale at my headache doctor’s office decided I had gained 5 pounds between my house and her office. To make matters even more ridiculous, the nurse who measured and weighed me, pronounced me 5’9″ tall.

That strange scale interaction weighed heavy on my mind (pun might have been intended) as I prepared myself to go meet my new brain doc. 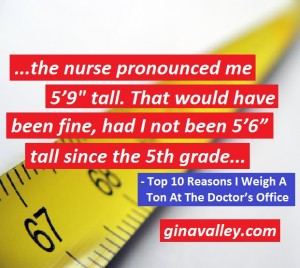 So, I walked into my doctor’s office with the morning’s gravity check number well cemented in my head.

When the cheerful nurse told me to climb onto the scale I was careful to stand in the middle of the platform, and to put my purse down (that’s like 50 pounds easy, all on its own). I even remembered to exhale. Every little bit helps.

The more I thought about it, the more I realized there are many logical explanations as to the varying gravity effects readings. 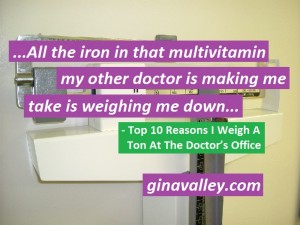 #10.  All the iron in that multivitamin my other doctor is making me take is weighing me down. Iron is a metal, and metal is heavy. So, the weight discrepancy is her fault, really.

#9.  Gravity is extra strong in their realm, due to all of the heavy issues taking place there. They are often involved in life or death decisions. Just last month, I saw 2 nurses nearly come to blows over whether they should get Chipotle or Baja Fresh for lunch when I visited my gyno. And, recently, our new pediatrician nearly put his eye out when the glove he was blowing up to turn into a rooster for my youngest son suddenly exploded. It’s all fun and games until someone loses an eye.

#8.  I wore my polka dotted underwear, and those dots must weigh a lot.

#7.  Our blonde Labrador insisted on hugging my legs goodbye as I was rushing out the door. All the blonde dog hair stuck to my black pants, which I didn’t notice until I was sitting in the waiting room, weighs a lot. There was practically enough there to make a whole new dog.

#6.  The nurse is new and didn’t know she wasn’t supposed to stand on the scale with me. I thought she was just standing extra close so she could see the numbers. 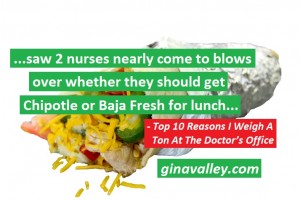 #5.  My body was retaining water in an effort to keep from turning into a raisin when they took out the gallon of blood they always insist on taking.

#2.  My new flip flops are lined with lead. I’ve got to start reading labels.

Finally, the doctor’s office scale phenomenon started to make sense to me, but not to everyone.

“There’s nothing wrong with the doctor’s scale. You just weigh more than you think you do,” offered The Professor. This from the man who said that his high blood pressure reading was because he slept on that arm the night before the test.

I would have stabbed him with the tongue depressors I “borrowed” from the exam room, but I’d already had my cardio for the day.

I, then, reminded him that all I’d need is one woman on that jury, and I’d be off Scot-free.

Do you weigh more at your doctor’s office than at home?  Are you taking iron supplements, too?  Has anyone insisted you are taller than you know you are?  Shoot me a comment. I’m looking forward to hearing what you have to say.