Men and women are different. Have you noticed?

He will tell you exactly what he weighs. 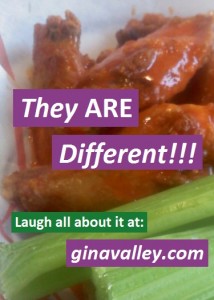 He will brag if he is currently at his heaviest weight ever and will gladly weigh in front of you and let you see his abdomen to prove he is the heaviest he’s ever been.

He’ll happily holler his current weight across a crowded room to you, particularly if it has gone up due to a recent large, questionable meal (The same is true if his weight has recently gone down due to an unusually prolific off-loading experience on his part, but that’s really a topic for a different column).

He’ll proudly tell you the size of the clothes he’s just expanded into. He’ll show you the tags to prove it. He’ll even wear shirts with size printed right on the front and pants with the size embroidered onto the waistband for all to see.

He’ll prefer to weigh with jeans and boots on so as to up his number. He might even leave his keys, cell phone, and wallet in his pocket to give himself just a bit more heft in the gravitational attraction department.

He won’t even exhale before reading the scale.

There’s no shame, no concern, no self-consciousness.

You ask a man what he weighs and he will tell you.

You ask a woman what she weighs and she will stab you.

Or, maybe that’s just me.

Do you share your gravitational attraction number with other people?  Or, is that a secret guarded more closely than Fort Knox? Why, do you suppose, we stress so much about that number? Shoot me a comment. I’m looking forward to hearing what you think. And, as always, thank you for stopping by and spending your time with me!

I Have TWO Black Thumbs!!!

They ARE Different!!! …Gina’s Favorites

Top 10 Reasons I Weigh A Ton At The Doctor’s