Are You Ready For Some Football?…Gina’s Favorites

It’s a big week for fans of the pigskin, hot wings, or big parties.  So, I figured my Are You Ready For Some Football? post would be just right for Throwback Day.  Here’s a handy guide to understanding America’s favorite tackle sport.  If you understand children playing, you’ll have no trouble with grasping the finer points of this game.  And, laughing about them.

Are You Ready For Some Football? 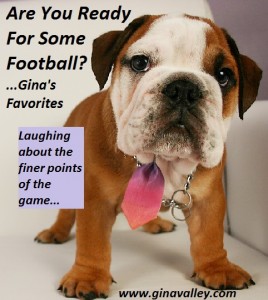 Are you ready for some football?

Perhaps you say, “But, Gina, I don’t like football.”

Fair enough.  Just because 1 out of every three Americans and countless more the world over are watching it this week, doesn’t mean you have to watch it, much less like it.

But, before you relegate yourself to watching the Puppy Bowl again, or reading as a conscientious objector, let me just ask you to think about this:

Is it possible that the reason you are less than fond of this battle of a game is because you find it all a bit confusing and unrelatable?

Come on, throw me a bone here.  It’s possible, right?

Now, I confess that I love sports. All sports.  Granted hockey is my favorite, but football is a lot of fun to watch, too.  But, you have to understand what is going on to totally appreciate it.

Let me let you in on a little secret – here’s the key to the whole American football sport for my non-football-ite readers out there: 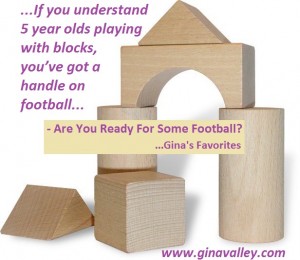 American football (just “football” for the rest of this column) is like two 5 year olds playing with a pile of blocks.

It’s just like that.  If you can understand what’s happening when 5 year olds play with blocks, you’ve got a handle on football.

Each football team wants to make the biggest pile of points that they can.  Their entire drive and goal is to get more points than the other time.  If one team scores its points in a more skillful manner than the other, that’s great, but what really matters is whose pile is bigger.

When trying to get blocks out of the bin, 5 year olds take turns.

When trying to get points, football teams take turns.

5 year olds get several tries, or “do overs,” in their efforts to make progress toward building a tower.

Football teams get 4 “downs,” which are really “tries” or “do-overs,” in their efforts to pileup points.

If 5 year olds behave in certain ways they will get a time out, which takes them farther away from the tower they want to build. 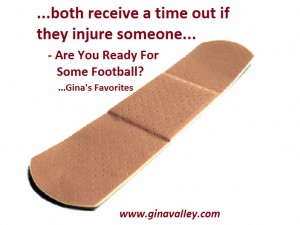 If football teams behave in certain ways they will receive a penalty, which, in general, moves them 5 -15 yards farther away from the points they want.

5 year olds will get a time out if they to use certain strategies that would be considered cheating or dangerous in their quest to build their pile of blocks or in an effort to prevent their opponent from building his.

Football teams will get a penalty if they to use certain strategies that would be considered cheating or dangerous in their quest to build their pile of points or in an effort to prevent their opponent from building his.

5 year olds receive a time out if they do something that would injure each other.

Football teams receive a penalty if they clip, chop block, run into the kicker, make illegal contact, illegally block in the back, or face mask their opponents.

5 year olds must not try to cheat when building their towers.

Football teams must not intentionally ground the ball or use illegal procedure.

A 5 year old must keep the bin of blocks in the play area or mom will move it closer to the other 5 year old. 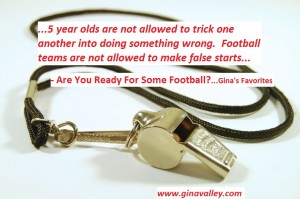 A football team must keep the ball inbounds at kickoff or the referee will move it closer for their opponent.

5 year olds receive a time out if they throw a tantrum.

Football teams receive a penalty if they have unsportsmanlike conduct.

Football teams receive a penalty for holding their opponents, for interfering with their opponent’s efforts to get ready to catch the ball, or for delaying the game.

5 year olds are not allowed to trick one another into doing something wrong.

Football teams are not allowed to make false starts.

5 year olds must remain in their proper tower building territory.

Football teams must not commit encroachment.

In the event of a dispute during the tower building, 5 year olds can call in their mom, tell her their stories, and ask her to settle their differences a couple times.  After that, complaining to mom will get them into trouble. 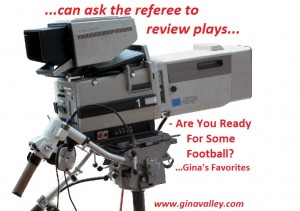 In the event of a dispute during the football game, football teams can ask the referee to review plays a couple of times during each half of the game.  After that, complaining to the referee will get them into trouble.

5 year olds are not allowed to brag about how great they were at putting a particular block on their tower.

Football teams are not allowed to have illegal celebrations after scoring.

Do you love football?  Do hate it?  Do you show up to hang with friends or for the yummy snacks?  Do you have a question about the game?  Shoot me a comment.  I’m looking forward to hearing all about it.