Time To TOTALLY Over Do It!!! …Gina’s Favorites

Enjoy some sugar-laced laughs in this Gina’s Favorites post I wrote about one of our past Slurpee hunts.

How To TOTALLY Over Do It

There are a million different places you can go for advice on sensible eating.  This is NOT one of them. But, I can give you advice on how to totally overdo it! Overdoing it is important, too!

I am a big believer that everything should be done in moderation, including moderation. Sometimes, just for fun, just for laughs, just for memories, you NEED to overdo it. We over did it. And, it was great! 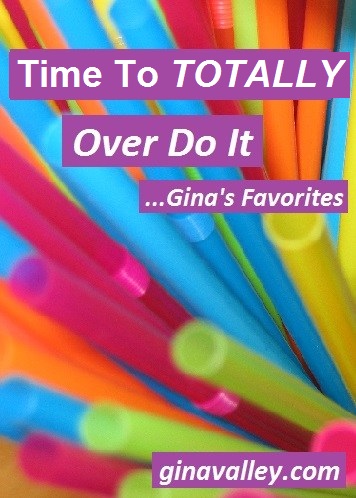 My kids love them, so we were not about to miss this opportunity. But, when we do something, we rarely go about it half way. We are “all-in” kind of people (that’s why our poker tournaments end so quickly!). So, we went out in search of “all in,” as in Slurpees, Slurpees, and more Slurpees! We decided to hit all 6 of the 7-11’s in our neighborhood.

‎The first stop, at 7-11 #1, was the bumpiest. I think that’s true of any quest. Like a thirsty herd arriving at the watering hole after a long day in the sun on the savanna, my pack pushed and grappled with each other to be first to fill their cup with frozen, slushy goodness.

When we got back to our van “someone” gave them a quick “if you won’t behave kindly in these places of business, I will not allow you to gorge yourself on nutrition-less frozen-sugar any further.” Might have been me. Sounds like something I’d say. Either way, it worked. They were all on their best behavior throughout the rest of our sweet hunt.

At 7-11 #2, I could hear my kids discussing Slurpee strategy. Some were going for different flavors. Others were planning to have the same flavor every time. There were even straw strategies. The single color straw fan. The alternating color fan. Several different colors at every stop fans. Cups were full, but not over flowing like at the first stop.

By 7-11 #3, style and skill had been acquired. I noticed artful twirls and twists at the top of each kids’ Slurpee. Sons#2 showed me that he’d figured out how to mix the different colors as he filled his cup so he ended up with a heart shape at the top. Someday I predict that being a cute ending to a date after-party. Some day. Someday far, far away.

We finished the first three stops in under an hour. As we were driving toward stop #4, I said to myself, “They aren’t gonna need dinner, are they?”  Most had inhaled at least four different colors of Slurpee already. 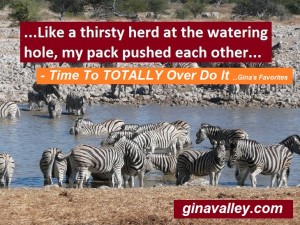 Sounded like a complete food pyramid to me. I figured the rest of the upcoming Slurpees on our afternoon trek would serve as dessert, and to ensure that no one wants another Slurpee again for at least a year.

As we pulled into the parking lot of 7-11 #4, we noticed a familiar red truck pulling out. It was the same Red Truck With Man & Daughter that we had seen at the previous stop. I looked around the parking lot and realized several of the cars had joined us at our previous stops. Truly, this was a Slurpee Fan Community Caravan.

My pack’s discussions at 7-11 #4 showed the sudden 7-11 efficiency experts they had become. They had suggestions for improved in-store traffic flow, for flavor machine order, even for straw dispenser location. I noticed that no one filled their cup all the way to the top.

Red Truck With Man & Daughter beat us to 7-11 #5. It had been a long journey. We were all exhausted. Well, actually it had been a short journey because we were riding in our van, but it felt long. And, we weren’t so much exhausted as full. But, either way, our spirits were low as we piled out of the van and dragged ourselves toward the door of 7-11 #5.

A couple kids mentioned that they were starting to feel a bit sick. We’d already hit 4 out of the 6 local 7-11’s. I reminded them that this was a marathon, not a sprint. It was time to push past that sick feeling, to grab another Slurpee, and to suck it up.

Just as we passed Red Truck With Man & Daughter, the window went down. We all stopped to see what was going to happen, which was easy to do because our kids were too full to move quickly.

Man spoke to The Professor in a voice that was quick, excited, and had clearly eaten way too much sugar. “There’s another one.  A seventh one! I just heard about it. There’s a seventh! A friend called and told me no one is there. It’s right by the freeway. And, it’s the one that crazy guy robbed last year!” Man blurted out all in one breath.

Well, this exciting news perked up our whole Slurpee Speed Ingesting Team. Not only was this a quest stop with no line, it was a crime scene! Who would want to miss that?!?!

Our whole pack made it through the line at 7-11 #5, although I noticed a couple hobbling as they emerged with their half-filled Slurpee cups.

All that stood between us and following in the crazy robber guy’s footsteps was 7-11 #6.

7-11 #6 nearly spelled the end of our sugar rush pilgrimage. Everyone was feeling sick as we piled out of our van. A couple kids asked if they had to go in (“Of course you do. You just don’t realize how much fun you’re having because you feel like you’re going to barf!”). I was feeling a bit nauseous myself, even though I’d yet to have a Slurpee, because the too-sweet smell of them was permeating our van.

I told them about the “wall” long distance runners hit as they compete in the Olympics, and that somehow they still manage to overcome and make it back into the stadium. “We shall overcome!” I assured them.

I also pointed out that they could still claim victory over Slurpee #6, even if they only put a little Slurpee in their cup.

Everyone dragged themselves into 7-11 #6 on our Slurpee Quest Tour. I noticed that only Son#2 filled his cup more than ¼ of the way full. No one looked too happy piling back into the van. But, even before we were out of the parking lot, a remarkable transformation began to take place. There was renewed giggling and chattering as we started off toward 7-11 #7.

The sugar had arrived in their bloodstreams.

I’m not saying 6 Slurpees is too much sugar, but by the time we hit the freeway for the quick hop over to 7-11 #7 my kids were having tongue trilling contests, for both duration and volume, as we drove. That wasn’t annoying. Not at all.

The lack of crime scene tape or any other post-crime paraphernalia disappointed my pack as we drove up to 7-11 #7. I reminded them that the robbery had taken place a year earlier, but they felt there should have at least been a police car parked nearby.

Happily, my pack had pushed through their Slurpee “wall,” and practically ran through the door of 7-11 #7. They were happy little slurpers again as they emerged smiling. They returned home with stacks of paper cups and straws in their hands, and, hopefully, an understanding about the day’s deeper meaning in their hearts.

BTW – everyone was “starving” for dinner when we got home. But, no one wanted any dessert!

Set off on any quests lately? Have you tried the Blue-Raspberry flavor? I’m looking forward to hearing all about it! Be sure to leave me a comment with all the details!

Does This Sunscreen Raise Cholesterol?!?!