Actually, I love all sports. Any sport.

I love to go to the games. Pro, college, minor league – I love them all. Naturally, my favorites to spectate at are my kids’ games. 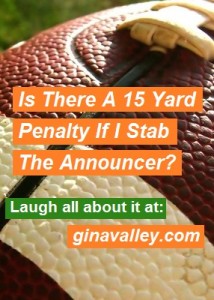 I love to play, too, although my enthusiasm far out distances my skill level. I stink at pretty much every sport equally, although I have achieved particularly awesome results at badness in some.

I have all kinds of pet peeves with the things sports announcers say. One of my favorites is “What do you think your team needs to do to win today?” Here’s a thought – score more than the other team, Sherlock!

Or how about, “You have Joe Pro Quarterback in the starting lineup today. Do you think he’s healthy enough to handle the job?” No, they don’t think he can handle it. They’re just putting him in to boost his self-esteem. Coaches aren’t so much worried about who wins.

And, don’t get me started on the stupid questions they often ask during postgame interviews. “You just lost 48 to 0. What happened out there today?” What happened out there? What? Weren’t you watching the game? Obviously they ran all over them. They got smashed, dragged, and taken to the dumpster.  Pay attention, Fool! 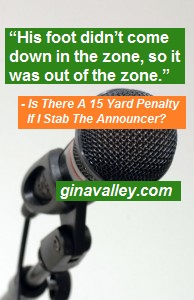 When I scream, I mean chat, at hockey games on TV, I am helping the players. They can hear me. I don’t care what you say.

But, when I scream at football games on TV, I am yelling at the announcers. They drive me bananas.

I know they have to fill the air time, and we all have our mush brain moments, but football announcers have made stating the obvious and stupid into, for lack of a better, non-four letter word, art.

Really? Thanks! I’m sure none of us fans at home had figured that one out. What are the yard markers for?

“His foot didn’t come down in the zone, so it was out of the zone.”

Wait a minute. I want to write that gem down.

Hold the phone. Do the coaches know that? 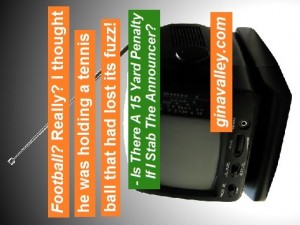 We have a large screen, HDTV, but even if I was watching it on a 4” fuzzy, battery-powered, car TV in the woods, I’m relatively sure I would be aware that the game I’m watching is a football game. I can’t remember the last time I tried to tune into a football game, and round about 3rd quarter suddenly realized I had been watching a Yahtzee game the whole time.

Football? Really? I thought he was holding a tennis ball that had lost its fuzz, and been horribly disfigured in a freak racquet accident. Good thing he brought that to my attention. 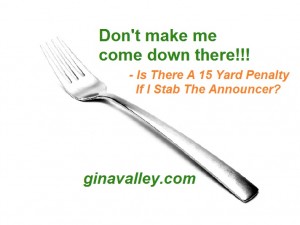 You mean this isn’t pickle ball? Well, that explains the lack of paddles and nets. I was wondering what the deal was. Thank you, Mr. Announcer, for clarifying that for me, 56,000 times during the first half alone.

I have a fork at the ready in my purse.

Do TV sports announcers drive you crazy? When was the last time you yelled at your TV screen? Is it just me? Shoot me a comment. I’m looking forward to hearing all about it.